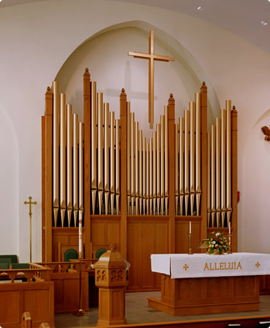 The former pipe organ at Emanuel Lutheran Church in Napoleon, Ohio, was constructed in 1921 by the Pilcher Organ Company of Louisville, Kentucky. The ten rank instrument was located at the right of the chancel.

Muller installed a new two manual, 18 rank instrument using pipework from the Pilcher instrument. The new casework is designed in the style of the original case, and makes use of the restored facade pipes. All mechanical components in the organ are new.

Tonally, our objective was to update the design of the instrument to more effectively lead liturgy. A new principal chorus in the Great provides the foundation for the entire organ, while the subtler chorus in the Swell serves in contrast. Existing 8′ strings were revoiced to produce a celeste stop for each manual division, and the independent flutes are the color stops. The new Trumpet is the fire of the instrument, and provides both a solo and a powerful chorus reed. The restored Oboe completes the ensemble, serving as a beautiful solo voice in the Swell.

An important element of the project was the renovation of the sanctuary. As part of the overall project, the chancel area was redesigned to allow for relocation of the organ to the center for optimal tonal projection, and new plaster was applied to the ceiling and walls, substantially improving the acoustic of the room.

Successfully blending new pipework with existing, the organ preserves the traditions of the past, while looking forward to the future. The new organ is well equipped to serve the congregation of Emanuel Church for generations to come. 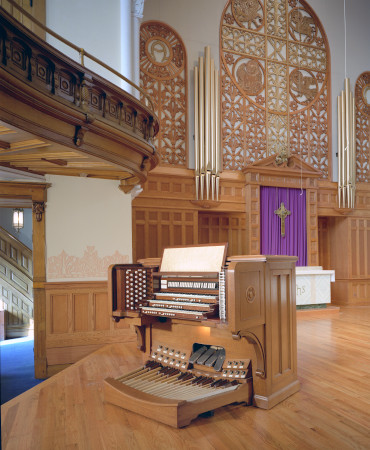 Next Up >
Rebuilt Pipe Organs 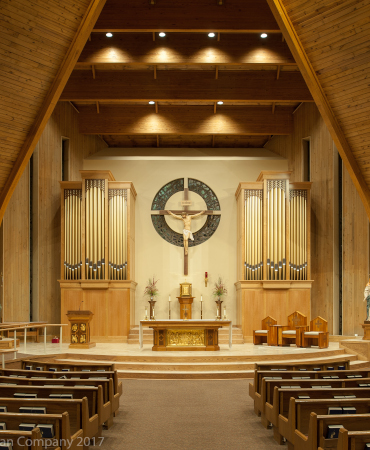