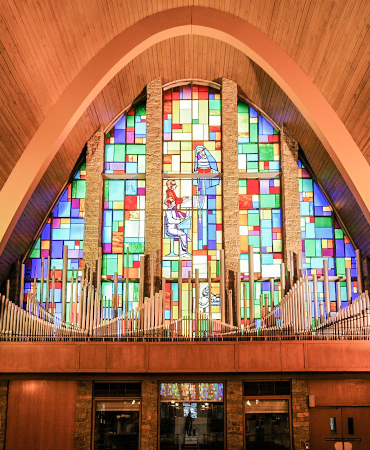 Turn Back the Clock

After more than 60 years, the Tellers organ at Saint George Catholic Church, Erie, Pennsylvania was quickly becoming unplayable. Failing leather, significant dirt, and a worn-out console made playing the instrument difficult and uninspiring. Time had not been kind to this once commendable pipe organ.

The goal of this project was to turn back the clock to when the organ was built in the late 1950s, and endow the instrument with further decades of service. The mechanism was entirely removed, cleaned and refurbished. The console received a new operating system and keyboards.

Visually and tonally, the organ reflects the room. The large Great division is spread across 40’, with bass pipes arranged in random order to reflect the abstract nature of the window it sits below. This is the larger of the two divisions, with five 8’ stops, and a completely independent plenum. The Swell division is smaller, but still possesses three string stops, two reeds, and a smaller plenum.

Tonally, the organ was updated in small ways. The Great Principal pipes were rebuilt to achieve a brighter, more balanced tone. All pipework was checked for optimal speech and tone. Because of their placement in the Swell, the reeds must speak with authority. A small-scaled Oboe and Trumpet with English-style shallots were replaced with new pipework. Both were constructed using German-style tapered shallots, providing a more present, brighter sound with a high degree of fundamental. 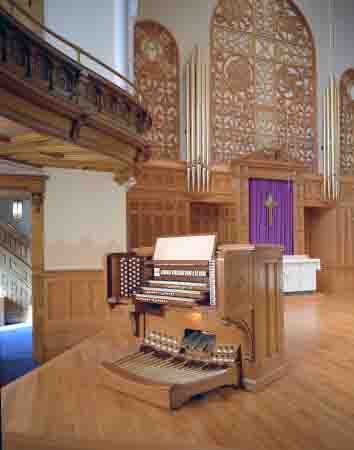